Breast cancer is one of the most frequent injuries in female dogs and often constitutes considerable aggressiveness. Your definitive diagnosis is established by histopathological examination, and the Pap test is still poorly used to help diagnose this injury in Veterinary Medicine. On the other hand, in Human Medicine, the Pap test has been widely used as an important auxiliary tool in the diagnosis of breast cancer, contributing to the decision of the therapeutic management and prognosis. Studies have shown that breast carcinoma in bitches and women share many similarities in the pathogenesis and morphological characteristics, mainly. On this track, this study aimed to carry out a comparative study between cytopathology and histopathology examinations of bitches and to establish their malignancy criteria, in order to verify the agreement between the parameters found and the applicability of the Pap test in the diagnosis of this injury in dogs, since the study of this lesion in these animals can also serve as a study model for the disease in women. The study of the samples and establishment of the criteria proved to be satisfactory, enabling conclusive diagnosis of breast cancer in bitches.

Mammary tumors are the most frequent neoplasm in dogs and the risks of developing the affliction increase after the animal is five years old. About 40% to 50% of mammary carcinomas are malignant and studies suggest that benignant tumors may evolve to malignant tumors. This neoplasm is very common in humans, but the incidence in dogs is three times higher. The primary cause of the affliction is unknown, but there are several studies outlining risk factors that influence its development, including hormones (either physiologic or iatrogenic in the case of progesterone intake to prevent estrus) and obesity, as well as nutritional and genetic aspects [1-7].
It is important to classify mammary tumors both in canines and in humans since the afflictions share similarities regarding their etiopathogenesis and morphological expression. The classification of mammary carcinomas also aid in determining the prognosis of each patient and in choosing a therapeutic approach. Mastectomy is still the main treatment for canine
mammary carcinomas, with complementary treatments such as radiotherapy and chemotherapy employed in cases of inoperable tumors and inflammatory carcinomas. However, survival after the procedure and the risk of metastasis are the main clinical complications for the treatment [7-9].
In dogs, the diagnosis of mammary cancer is usually reached through an histopathological assay after the mastectomy, which means that it’s uncommon to perform diagnostic tests before the surgical procedure. On the other hand, in humans, the diagnosis is confirmed before any therapy is started [10-15].
Cytopathological assays have been widely used in humans for establishing the diagnosis, the prognosis and for determining the treatment due to the high compatibility between the histopathological assay and the cytopathological assay. In women, the cytopathological assay presented sensitivity of 65-96% and specificity of 83-100%, but there are few studies on this subject in the field of veterinary medicine [6, 16-20].

The project was submitted to the Ethics Commission for Animal Use (CEUA, from Portuguese Comissão de Ética no Uso de Animais), receiving protocol number 76/2014 for evaluation and later approval. The commission was created and is maintained by FMVZ, UNESP, Botucatu campus
The validity of using a cytopathological assay for diagnosing and classifying mammary tumors is controversial, but the activities performed for this study have evidenced patterns that repeat across several samples, paving the way for creating a table with the observed criteria. The materials employed in the study were obtained through the diagnosis archive of the Veterinary Pathology Service at the FMVZ Veterinary Hospital, Botucatu Campus from a timeframe between 2009 and 2012. The samples were selected and assessed for diagnosis and quality of the material through Giemsa staining. For the histopathological and cytopathological diagnosis, we applied the evaluation system established by the Brazilian National Cancer Institute (2002). The reading was taken in a light microscope (ZEISS 3 – I Model AXIO Imager A1).
We analyzed 32 samples of cytopathological assays that had a corresponding histopathological assay. For each sample, we considered quality control to be either satisfactory or unsatisfactory. We also considered the nature of the wound as epithelial or myoepithelial. The criteria observed were grouped in four major categories: arrangement, cytoplasm, nucleus and microenvironment. For arrangement, we used the following key to indicate percentage bands: “++++” for 100%, “+++” for 75%, “++” for 50% and “+” for 25%. Aside from the aforementioned criteria, we also included criteria related to nuclear characteristics, cytoplasmic characteristics and microenvironmental characteristics in tumor cells. All these characteristics were organized in a table to classify malignancy. 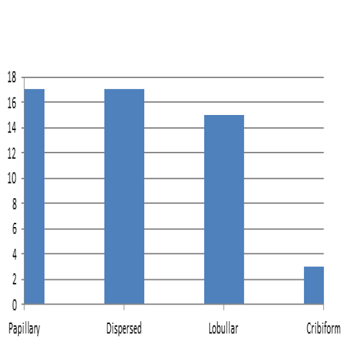 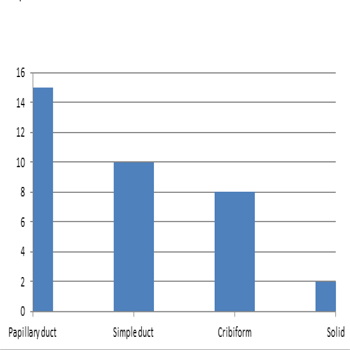 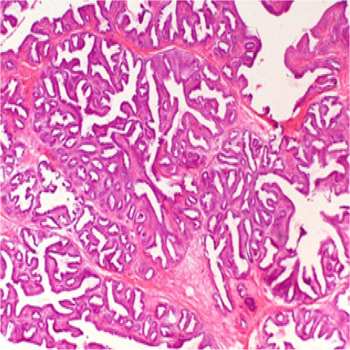 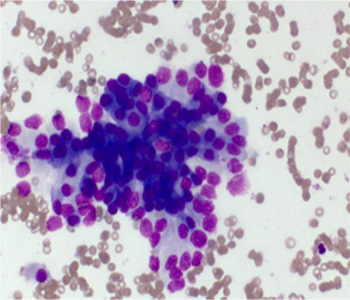 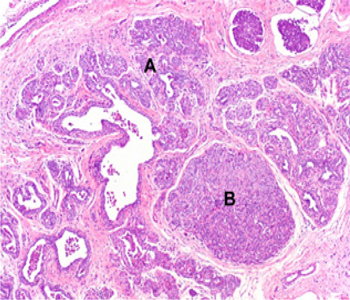 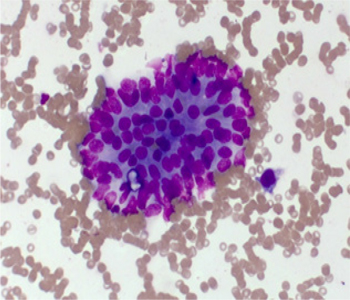 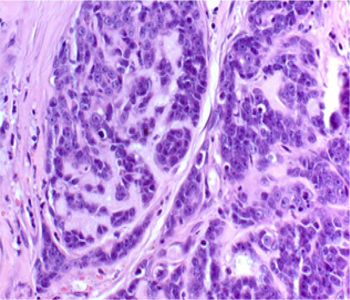 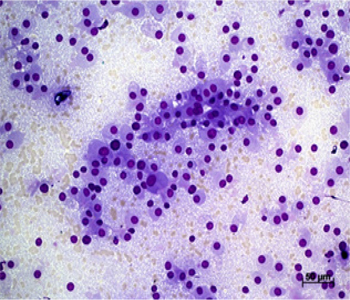 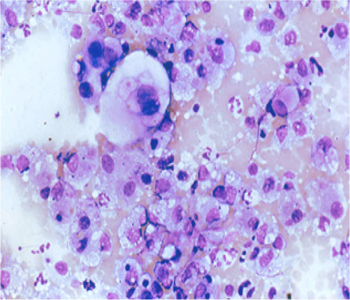 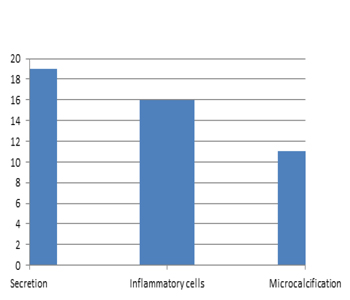 The assessment of the cytopathological samples allowed us to verify that neoplasms present varying degrees of aggressive- ness depending on the criteria observed and the frequency some criteria repeat themselves across different samples. For an assay to become a diagnostical method for mammary neoplasms, we need to understand not only the technique, but also the structures being analyzed and comparing their normal states to what is observed [21, 22].
Given these facts, we can also verify the lack of methods for assessing the malignancy of carcinomas, a characteristic that would be very important due to how often these neoplasms display varying degrees of aggressiveness, which may be observed both in cytopathological and histopathological assays: the papillary arrangement was prevalent in both assays. This, aside from showing a considerable degree of concordance between the results, also indicates a certain degree of aggressiveness for the wound since the formation of papillae differs from the morphology of a normal acinus
Another important finding was the presence of a secretion in a considerable number of samples across both assays, implying hormonal activity and, therefore, a possible progression of the wound if not treated adequately
It is important to stress that there are some cellular characteristics that are easily detectable in a cytopathological assay, but hard to detect in the histopathological assay, such as those regarding cytoplasm and nucleus. For example, cytopathology enabled the visualization of fibrillar cytoplasm and multinucleation, which indicates a considerable degree of aggressiveness if we consider the normal morphology of the cell. This highlights the fact that the assays share some characteristics, but there are also some characteristics from the cytopathological assay that cannot be observed in the histopathological assay [17].
In addition, the nomenclature and terminology created in cytopathology aim at grouping diseases in categories to reduce subjective variations and add value to the diagnosis and the care of the patient. Communication through a universal language is a field that has been widely studied and applied to medicine. Considering this, we observed the fact that organizing the malignancy criteria in a table is something that warrants further studies given the lack of such information in the literature [23].

Under the light of these results, the cytopathological assay may, in fact, be used as an auxiliary or alternative tool in the diagnosis of canine mammary cancer. In addition, the assay has its own characteristics that cannot be observed in the histopathological assay. This dichotomy also contributes towards the qualification of the assay as part of an array of diagnostic possibilities for the affliction.