Background: Although bronchoesophageal fistula (BEF) is well-known as congenital disease, adult cases of BEF are extremely rare. Clinician should be care of different diagnosis and treatment of BEF. Case: A 47-year-old man was admitted to our emergency department with complaints of dyspnea and refractory cough. Computed tomography and upper gastrointestinal fiberscopy revealed a fistulous tract running from the esophagus to the left lower bronchus lobe. He had no history of trauma and histological findings did not show malignancy or infectious disease. Result: Left lower lobectomy, primary suture of the esophagus, and intercostal muscle patch were performed; however, suture insufficiency was recognized. After additional retrograde esophageal drainage through the stomach, the patient was uneventfully discharged on post admission day 48. Histopathological findings presented no abnormal tissue. Conclusion: BEF in an adult is rare but curable. Surgery is a definitive treatment.

Although bronchoesophageal fistula (BEF) is well-known as a congenital disease, it is rarely seen in adults. Most common causes of acquired BEF in adult are malignancy, infection, trauma, and inflammation. We experienced a case of acquired and idiopathic BEF in an adult, therefore described our rare case and review of manuscripts associated with BEF.

A 47-year-old man was admitted to our emergency department with complaints of fever, cough, and dysphagia with liquid ingestion. Information from the hospital from which he was transported indicated that esophageal tissue biopsy disclosed no evidence of malignancy, cytomegalovirus (CMV), or herpes simplex virus. Tuberculosis was not identified by interferon-gamma release assays test and polymerase chain reaction from the sputum. Findings from his general examination on arrival were as follows; heart rate 95 beats per minutes, blood pressure 97/66 mmHg, respiratory rate 16 breaths per minute, oxygen saturation 100% with 2L oxygen, body temperature 36.60 C, Glasgow Coma Scale score E4V5M6. Laboratory examination results were as follows: white blood cells 8700/μ,, hemoglobin 10.4g/dl, C-reactive protein 14.3mg/dl (Table 1). Anti-human immunodeficiency virus (HIV) test was negative. His chest radiography showed an abnormal shadow in the left lower field, suggesting pneumonia (Figure 1A). Chest computed tomography revealed a fistula running from the middle esophagus to the left lower bronchus, with pneumonia and atelectasis in the left lower lobe (Figure 1B). Contrast radiography of the upper gastrointestinal tract showed a barium outline of the esophagus, fistulous tract, and the left lower lobe bronchus (Figure 1C). To detect the cause of the fistula, gastrointestinal fiberscopy (GIF) was performed. Multiple longitudinal ulcers and fistulas were recognized (Figure 1D). No malignant or inflammatory tissues were recognized from GIF or previous hospital findings. Considering the above findings, we diagnosed the patient with idiopathic BEF with unknown origin. He was transferred to the surgery department located next to our facility. 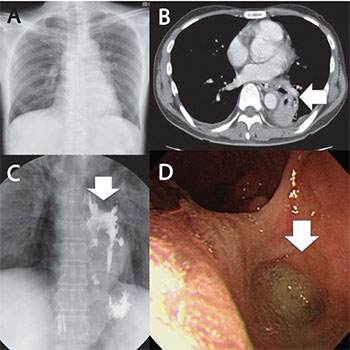 After nutritional therapy via nasogastric tube, left lower lobectomy with a pedicled patch-closure of the intercostal muscle to the esophageal defect was performed. The fistulous esophagus was closed with absorbable suture. After surgery, leakage from the sutured esophagus was discovered. Although drainage via the thoracic cavity and nasogastric tube continued to cure the injured esophagus, the nasogastric tube caused the patient discomfort. A continuous long period of drainage was necessary. Surgery for enteral alimentation and retrograde esophageal drainage from the stomach was then performed. After this operation, the patient's discomfort disappeared and the fistula improved gradually. He was discharged from the hospital on postoperative day 48. Resected specimen did not show malignant tissue or abnormal cells.

BEF is well-known as a congenital disease and is thought to have been first reported by Negus in 1929. Frequent causes of acquired BEF include malignancy; on the other hand, benign causes such as tuberculosis, inflammatory conditions likeCrohn’s disease, and traumatic factors have been found to be responsible for only 5-6% of cases [1]. BEF is divided into four types along with Braimbridge and Keith’s classification of BEF in 1965: type I, esophageal diverticulum with a large ostium and fistula at its tip; type II, a short tract running directly from the esophagus to the trachea or bronchus; type III, a fistulous tract connecting the esophagus with a cyst in the lobe, which also communicates with the bronchus; and type IV, a fistula that leads into a sequestrated lobe or segment [2]. Common complaints are recurrent bouts of cough, hemoptysis, dysphagia, and fever.
Esophageal cancer is the major cause of BEF in adults. BEF develops in 5% to 15% of patients with esophageal cancer, leading to life-threatening complications [3]. Treatment and adequate management of BEF is challenging. Kimura et al. reported a patient with advanced esophageal cancer with tracheobronchial fistula treated with esophageal bypass surgery [4]. Fukuhara et al. reported four cases of esophagobronchial fistula treated with stenting [5]. BEF caused by esophageal cancer is a sign of poor prognosis [6]. Palliative treatment and quality of life are the main concerns for these patients.
Tuberculosis is a common disease also considered to cause BEF. Sasaki et al. reported cases of BEF after anti-tuberculous chemotherapy and reviewed BEF cases secondary to tuberculosis in Japan [7]. HIV has the potential to induce BEF caused by infections such as candida, CMV, and mycobacteria. Andrew et al. reported a young male BEF patient with HIV infec-tion [8]. The increase in the number of BEF cases secondary to HIV infection was predicted with the increase in HIV infection. Traumatic factors, less so than other factors, are also associated with BEF. Long periods of endotracheal intubation , blunt chest injury , and foreign body ingestion are associated with BEF [9-11].

Treatment of BEF depends on the cause and situation. For a patient with cancer, BEF is a critical and life-threatening condition. Therefore, palliative care is important to avoid pneumonia or dysphagia. Instead of invasive bypass surgery, stent therapy may be suitable. On the other hand, definitive treatment is necessary for a patient with a benign disease. Although surgery is usually invasive and in-hospital mortality is 15.4%, early surgical intervention is recommended [12]. Stent treatment is controversial because the success rate of stent placement is still low and long term outcomes are unclear [1]. Our pre-operative examination did not uncover the cause of the fistula. Pathological tests, including biopsy of the esophagus mucosa, culture of pleural effusion, and tumor markers did not present specific findings. Although we could not identify the cause of the fistula, because of his long clinical course, we decided to operate. Surgical specimen did not identify malignant tissue or infectious lesion. Therefore, we diagnosed the patient with congenital BEF based on previous manuscripts describing idiopathic BEF.
To our best knowledge, 18 full text manuscripts associated with the keywords“congenital bronchoesophageal fistula” and “adult” have been published since 2000, according to a PubMed search. Of the 18 manuscripts, 13 were available in English and 26 cases were demonstrated (Table 2). Of these cases, the fistula presented from the right bronchus to esophagus in 16 cases, while eight cases had fistulas presenting from the left bronchus. Two cases had a fistula from the trachea to the esophagus. Surgical therapy had been performed in all cases and most postoperative courses were uneventful.

Table 2: Review of manuscripts associated with bronchoesophageal fistula from 2000.

We described a rare case of acquired BEF in an adult. Although leakage of the sutured esophagus was recognized, definitive left lower lobe resection surgery with intercostal muscle patch was effective. When encountering BEF patients, physicians must consider acquired BEF if any episodes such as malignancy, inflammation, infection, and trauma are not presented.
Consent
Written informed consent was obtained from the patient for publication of this case report and any accompanying images. A copy of the written consent is available for review by the Editor-in-Chief of this journal.
Competing Interests
The authors declare that they have no competing interests.