Predictors of Clinical Outcome after Intravenous Thrombolysis in Ischemic Stroke without Large Vessel Occlusion: The Role of Admission Glycemia

Introduction: In the era of mechanical thrombectomy, intravenous thrombolysis (IVT) by tissue plasminogen activator (tPA) remains the first choice treatment for ischemic stroke without large vessel occlusion. In literature few studies are available regarding the acute phase treatment of ischemic stroke without large vessel occlusion. The existence of potential predictive factors of clinical improvement after IVT treatment in this subgroup of stroke patients is not well established.

Aim of the study: To identify predictive factors of clinical outcome in patients treated with tPA alone for acute stroke without large vessel occlusion.

Methods: A retrospective analysis of a prospectively collected database of consecutive patients aged over 18 years, hospitalized in Stroke Unit of Nice from January 2012 to August 2016 for acute ischemic stroke without large artery occlusion, treated with IV tPA within 4.5 hours, were realized. Clinical outcome was apprehended by the modified Rankin Scale (mRS) at 3 months. To determine independent predictive pre-treatment variables of good clinical outcome (mRS=2), univariate and multivariate binary logistic regression models were used.

Conclusion: Age, baseline NIHSS and admission glycemia are independent predictive factors of clinical outcome after IVT. Admission glycemia was the only modifiable independent predictive factor found. Studies are required to demonstrate the potential benefit of an aggressive glucose-lowering treatment for the management of acute hyperglycemia in acute ischemic stroke including stroke treated by tPA alone.

Stroke is the leading cause of morbidity and mortality in industrialized countries [1]. It is a devastating condition requiring an immediate medical treatment by physicians well experienced in stroke management. Intravenous thrombolysis (IVT) with tissue plasminogen activator (tPA) has been shown to be capable of improving clinical outcome in a selected group of ischemic stroke patients within 4.5 hours after stroke onset [2, 3]. In 2015, randomized controlled trials (RCTs) demonstrated the effectiveness of mechanical thrombectomy (MT) in addition to IVT for acute stroke due to large artery occlusion. Since then, the way of approaching the treatment for any acute ischemic stroke was split, dividing the ones caused by large artery occlusion by the others. Although most of the attention is now focused on the MT, IVT alone remains the first choice treatment for ischemic strokes without large vessel occlusion, which statistically are the most frequent. Nevertheless, in literature few studies are available regarding the acute phase treatment of ischemic stroke without large vessel occlusion. The IVT efficacy is well established but the response to this treatment is variable. In order to select patients who will benefit the most from the IVT treatment, an accurate analysis aimed to detect potential predictive factors of clinical improvement could be very important. In the literature, a number of studies are available on this issue, analyzing demographic and biological characteristic, medication use before stroke and radiological characteristics [4,14]. The aim of this study is to identify predictive factors of clinical outcome for patients affected by stroke without large artery occlusion receiving IVT alone.

Aim of the study
To identify predictive factors of clinical outcome in patients treated with tPA alone for acute stroke without large vessel occlusion.

We performed a retrospective analysis of a prospectively collected database of consecutive patients aged over 18 years, hospitalized in Stroke Unit in Nice from January 2012 to August 2016 for acute ischemic stroke without large artery occlusion, who received a recanalization treatment with IV tPA within 4.5 hours from symptoms onset. We excluded all patients who did not received a vascular neuroimaging at admission and those with missing clinical follow-up or presenting missing data after 3 months period. At the admission, every patient has been evaluated by a neurologist. Stroke severity has been graded using the National Institutes of Health Stroke Scale (NIHSS). Baseline clinical and biological characteristics are recorded. For each patient has been carried out an imaging evaluation by cerebral MRI or CT angiography scan, documenting the absence of large artery occlusion. We recorded radiological data as stroke volume (by circumventing manually hyperintensity area on diffusion weighted MRI (DWI) sequences), MRI Alberta Stroke Program Early Computed Tomography score (ASPECTS) applied to DWI, stroke localization (anterior or posterior), presence of an old ischemic stroke in MRI FLAIR, leucoaraiosis (Fazekas classification), Distal Hyperintense Vessel Sign (DHV) on FLAIR and presence of cerebral MicroBleeds in T2* sequence [15, 16]. IVT by tPA was administered according to the National Institute of Neurological Disorders and Stroke rt-PA Stroke Study protocol [2]. In case of admission elevated blood pressure (SBP>180 mmHg), a treatment by IV Nicardipine has been administered. The workflow's duration from stroke onset to emergency admission, radiological imaging and thrombolytic treatment was calculated. After 24 hours, the hemorrhagic complications were recorded in accordance with ECASS I classification. After 3 months, modified Rankin Scale (mRS) was computed based on clinical follow up by neurologist or by means of telephonic interview. After etiological evaluation every stroke event was classified in accordance with "Trial of Org 10172 in Acute Stroke Treatment" TOAST criteria. The main clinical outcome considered within this study is the mRS at 3 months. The modified Rankin Scale (mRs) is the most popular outcome measure and is an ordinal scale with 6 categories ranging from zero (no symptoms) to five (complete physical dependence). A sixth category can be added to signify death. The population was dichotomized into two groups: independent patients with a mRS between 0 and 2 and dependent or death patients with a mRS equal to 3 or higher.

The research was conducted according to the principles of the Declaration of Helsinki.

In order to define a statistically significant difference according to clinical outcome a univariate analysis of pretreatment data was computed. Chi 2 test was assessed for categorical variables and Student's t test for continuous variables. Non parametric continuous variables were represented by medians and interquartile ranges and medians and standard deviation for parametric variables. Categorical variables are presented by absolute numbers (%). p<0.05 was considered to be significant. Independent predictive variables of good outcome (mRS=2 at 3 months) were assessed by multivariate analysis by backward stepwise logistic regression. The regression model included all non-redundant variables associated to mRS=2 at 3 months with p<0.1 in the univariate analysis. Statistical analyses were conducted using STATA SE Version 10.0 software.

As from January 2012 to August 2016, 172 patients met the inclusion criteria. 10 patients were excluded from the study according to exclusion criteria. Baseline characteristics of studied population are presented in Table 1. 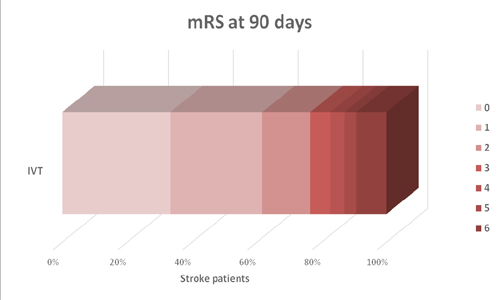 The univariate analysis is presented in Table 2. Looking at demographic and cardiovascular risk factors, characteristics associated to functional outcome at 90 days were age (p<0.001), hypertension history (p=0.006), tobacco use (p=0.039), coronary disease (p=0.021) and peripheral artery disease (p<0.001). Within the two groups no difference was reported with regard to history of atrial fibrillation. The stroke severity measured by NIHSS was a predictive factor of poor clinical outcome (11.68±5.10 versus 8.94±4.92; p=0.005). Admission blood glucose level before IVT was higher in patient with worse clinical outcome (1.24±0.39 g/dL versus 1.48±0.48 g/ dL; p=0.009). Patients with poor clinical outcome had higher stroke volume on DWI apprehended by measure of volume (16.45±22.09 cm3versus 9.08±14.81 cm3 ; p=0.088) or ASPECTS(p=0.066). As for biological characteristics, clearance of creatinine and BNP levels were significantly higher in the dependent-death group.

IVT constitutes the mainstay of therapy in acute ischemic stroke. In recent years, most of the attentions are focused on stroke due to large vessel occlusion, and in literature few studies are available regarding the acute phase treatment of ischemic stroke without large vessel occlusion. In this study, we have analyzed the predictive factors of clinical outcome after IVT in patients having an acute ischemic stroke with distal artery occlusion. In this context, we highlight that admission glycemia, a modifiable variable, is an independent predictor of clinical outcome like non-modifiable factors such as age and baseline NIHSS.

This study supports that age, baseline NIHSS and admission glycemia are independent predictive factors of clinical outcome after IVT (Table 3). These results are in line to previous reports studying independent predictors of functional outcome in stroke patients with or without large vessel occlusion treated by tPA [20]. Clinical severity of stroke apprehended by baseline NIHSS is a classical independent predictive factor for poor functional outcome, and our analysis confirm it (/5 pts; OR 1.57 [1.06-2.32]) [21]. IVT in elderly is largely diffused. According to our results, increasing age is associated with poorer outcome (/10 years; OR 1.62 [1.10-2.40]). Nevertheless, clinical benefits were demonstrated also in elderly stroke patients treated by tPA [22, 23]. In this study, we highlight that the admission glycemia is modifiable independent predictive factor of clinical outcome. For a stroke patient treated by tPA alone, the increase in admission glycemia of 0.5 g/L leads to increase the risk of dependence (mRS>2) by 1.63[1.14-6.25]-fold. We consider that the increased risk of dependence at 3 months after IVT was equivalent for the increase in 0.5 g/L of admission glycemia, 10 years of aging or 5 points on baseline NIHSS.

In literature, up to 50% of patients in the acute phase of ischemic stroke have hyperglycemia [5]. According to existing studies, admission hyperglycemia is considered as a common risk factor for poor outcome after ischemic stroke accelerating the molecular processes leading to cell death on ischemic penumbra [4]. Hyperglycemia facilitates development of tissue acidosis in the ischemic penumbra and is associated with worsening of mitochondrial function. In MR studies, hyperglycemia in acute ischemic stroke is shown to promote the evolution of hypoperfused tissue to infarction by means of increased brain lactate production. Concerning IVT, hyperglycemia is a strong stimulus to inhibit plasma fibrinolysis, increase levels of plasminogen activator inhibitor type 1 (PAI-1) and decrease tissuetype plasminogen activator (tPA) activity [24±27]. According to our results, admission glycemia is considered as the only modifiable deleterious factor in stroke patients without large artery occlusion, independently of a preexisting diagnosis of diabetes mellitus.

The potential benefit of a glucose-lowering treatment with aggressive insulin titration in acute stroke is not yet demonstrated, and this hypothesis is currently being testing in a large randomized clinical trial [28]. Our results confirm the interest to demonstrate acute neuroprotection by insulin therapy in stroke including stroke without large vessel occlusion.

In this study, we highlight predictive factors of clinical outcome in stroke patients without large artery occlusion treated by tPA. We realized that age, baseline NIHSS and admission glycemia level are independent predictive factors of clinical outcome at 3 months after acute treatment. Admission hyperglycemia was found to be a predictive factor for poor outcome independently of a diagnosis of diabetes and it was the only modifiable factor found in our cohort. Further studies are required to demonstrate the potential benefit of an aggressive glucose-lowering treatment for the management of acute hyperglycemia in acute ischemic stroke including stroke treated by tPA alone.