A popliteal cyst after total knee arthroplasty (TKA) is a rare occurrence. We present a case of popliteal cyst complicated by fistula resulting from prosthetic loosening, which was difficult to be differentiated from a post-TKA infection, The fistula had originated at a cyst in the popliteal region. A two-step revision process was followed as in a post-TKA infection. The patient in this report was symptom-free for two year following surgery.

Dissecting or ruptured popliteal cysts occur most frequently as a result of intra-articular knee pathology. Dissecting popliteal cyst after total knee arthroplasty is a rare occurrence. It has been reported that the cyst was associate with a failed total knee arthroplasty(TKA) related to polyethylene wear particles or prosthesis loosening [1-5]. Occasionally prosthetic loosening is difficult to be differentiated from a post-TKA infection. We report a case of popliteal cyst complicated by popliteal fistula resulting from prosthetic loosening, which was difficult to be differentiated from a post-TKA infection.

The patient, a 77-year-old man, underwent Lt TKA 10 years ago with a diagnosis of OA by another physician. Ten days after surgery, symptoms suggestive of a postoperative infection, such as swelling and local heat of the left knee, developed. Administration of an antibiotic brought the condition to a quiescent state. Six months after surgery, the swelling and local heat returned to the left knee; and this time the patient was subjected to arthroscopic synovectomy. Candida was isolated from the specimen obtained during the surgical procedure. Although he had been free of the symptoms since then, 4 years after surgery the arthritic symptoms recurred. Plain radiograms showed osteolytic lesions at the distal femur, medial side of the proximal tibia, and patella. The pain exacerbated.
A fistula had formed at the popliteal region with a discharge. The patient was referred to us for further examination and treatment.
A physical examination revealed swelling, slight local heat, and joint effusion of the left knee joint. The range of motion was 0 ~ 110°. An articular puncture yielded a bloody joint fluid but the results from a bacterial culture were negative. The popliteal region was slightly erythematous and locally feverish and had formed two fistulas, which were exudative (Figure1). 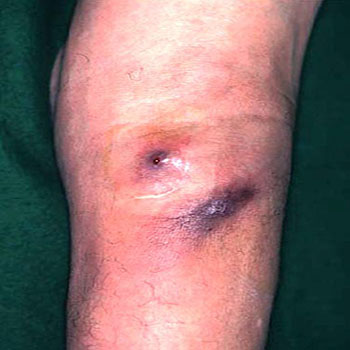 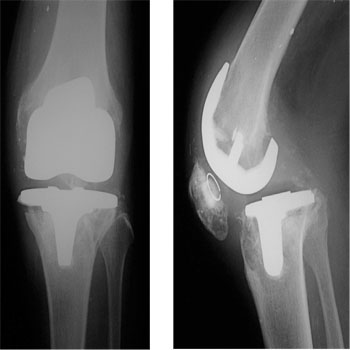 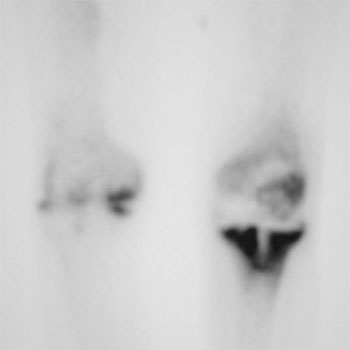 A post-TKA infection was suspected and the joint was opened to remove the joint prosthesis and insert antibiotic-impregnated polymethacrylate spacer block. The prosthesis had already loosened and was readily removed. Marked bone defects were noted at the proximal tibia and distal femur but the lesions were free of pus accumulation or formation of abnormal granulation, negating the possibility for an infection. The surgical wound was closed and the popliteal region was opened. Following an injection of indigo carmine into the fistula, the soft tissue was dissected, which revealed that the fistula had originated at a cyst in the popliteal region. The communication was not clearly found between the cyst and the intra-articular space. The cyst was extirpated (Figure 4) and the wound was closed, after which antibiotic-impregnated polymethacrylate spacer block were inserted in the intra-articular space. 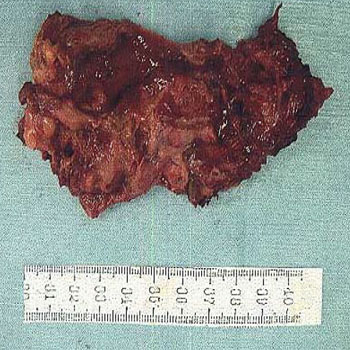 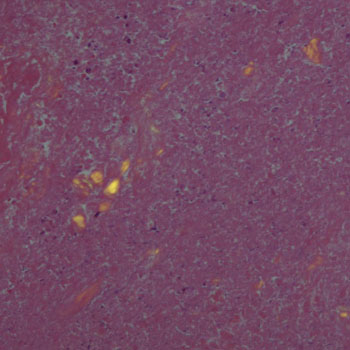 Within 2 weeks after surgery, the inflammatory reaction was eliminated. In the 4th week, a new prosthesis was inserted and cemented by using PFCS (Figure 6). The postoperative course has been satisfactory and the patient has been symptom-free for following surgery. 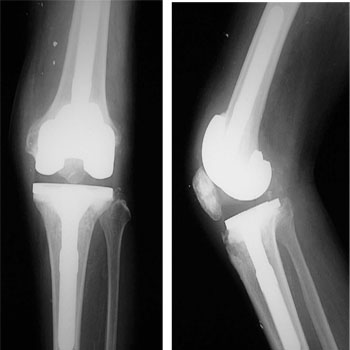 Knee pain after primary TKA is usually secondary to prosthetic loosening, infection, an osseous or prosthetic fracture, or thrombophlebitis. The findings that suggested an infection in this patient were: the development of a fungal infection 6 months after surgery, evident osseous changes on plain radiograms, and fistula at the popliteal region with the presence of pus-like exudates. The findings that appeared to negate an infection were: relative absence of pain after surgery permitting the patient to engage in his occupation (farming); and the negative results obtained from the repeated bacterial cultures obtained from the lesion. It was necessary to consider that this case was culture-negative prosthetic joint infection [6]. The reason was that sinus truct communicated with the cyst in the popliteal region. It was not certain if there was a commissure between the cyst and intra-articular space; but judging by the lesion’s location and shape, a popliteal cyst was a likely diagnosis.
A popliteal cyst after TKA is a rare occurrence [1-5]. Pavlov reported the first incidence in 1983 [1]. Two cases of popliteal cyst without loosening of the prosthesis were described: the lesion was difficult to distinguish from thrombophlebitis. Dirschl reported 4 cases with dissecting popliteal cysts as the presenting symptom of a malfunctioning TKA [2]. Chan reported a case of a large dissecting popliteal cyst 7 years after with symptoms of severe calf pain and functional disability [3].
In the present case, loosening of TKA and polyethylene wear were evident and it was suspected that either of the following two scenarios was responsible for the lesion [7, 8]. The debris particles from the loosened prosthetic and the wearing of polyethylene raised the pressure of the synovial fluid, which escaped into the surrounding soft tissue to form a synovial cyst; or the synovial fluid entered a popliteal cyst that had already formed and caused the latter to increase in size. It was conjectured that the excessively high pressure within the cyst caused it to rupture spontaneously, resulting in the formation of a fistula.
Dirschl recommended correction of the intra-articular pathology first, with excision of the popliteal cyst performed at a later date if symptoms persisted [2]. Chan et al. reported a 2-stage procedure on the large dissecting popliteal cyst after failed TKA [3]. We performed a two-stage operation on this unique case because of the popliteal cyst complicated by popliteal fistula. It was concluded that the sequence selected for the present - case the initial opening of the intra-articular space to remove the prosthesis, closing the wound as much as possible, and opening the popliteal region - was a sensible choice, although it was not possible to prove whether or not this case was culture-negative prosthetic joint infection. To replace the damaged knee prosthesis, a two - stage revision process was followed as in a post-TKA infection. According to the reports by others, the optimum timing is 6 to 8 weeks after surgery [9- 12]. In the present case, the procedure was conducted after 4 weeks when the inflammation had subsided. The postoperative course has been satisfactory, with no sign of infection.