Materials and methods Two samples of human dental enamel were divided into two groups: a) group I was irradiated with the Er:YAG and no water irrigation with next 25.5 J/cm2 energy density; b) group II was the control (no laser irradiation or control). The nanomorphology changes were observed by AFM in contact mode, in air, on square areas of topography on the 1 µm * 1 µm. Based on AFM data and applying the computational algorithms, the statistical functions were plotted.

Results The local scale properties of human dental enamel at nanometric level were estimated with the statistical functions. The graphical results showed the local and global non-uniformity of the surface patterns. The one way analysis of variance (ANOVA) was performed (P < 0.05) to distinguish significant differences among the groups.

Conclusions The computational algorithm indicated that the surface nanomorphology differ significantly of these two groups. AFM and the statistical functions applied for surface roughness provide important information about the surface nanomorphology to characterize of non-uniform micro-distributions from the 3-D surface of the human dental enamel.

Biominerals are a subset of the mineral kingdom, those created by living creatures. Among them, enamel is the hardest mineralized biological tissue, about 96 wt% (weight percentage) mineral in the form of crystallites of hydroxyapatite, 3 wt% water and and 1 wt% organic [1]. The enamel surface presents a variable appearance, exhibiting features such as aprismatic enamel, perikymata, prism-end markings, cracks, pits and elevations [2]. Furthermore, it has been reported that local factors in the enamel surface produce changes, such as those associated to oral habits, including toothbrushing, use of toothpastes, consumption of various beverages, as well as dental procedures between them, fluoride application, bleaching, etching agents and laser irradiation [3-13].

The Er:YAG laser is well absorbed by all biological tissues that contain water molecules, its use was approved in 1997 by the U.S. Food and Drug Administration (FDA) [14,15]. In dentistry, it is a versatile laser prescribed for the treatment of soft tissues and ablation of hard ones [14]. In addition, an early report suggested that enamel adjacent to the ablated area by Er:YAG laser irradiation exhibited an increase in acid resistance [16]. Several in vitro studies on smooth dental enamel surfaces concur that Er:YAG laser irradiation promotes caries prevention and produce morphological changes as revealed by SEM. However, the 3-D (three-dimensional) surface topographic features at nanometres level studied by Atomic force microscopy (AFM) have been scarcely evaluated [11-13, 17-21].

Application of the fractal and multifractal geometry has been used successfully in last years for numerical characterization of 3-D topography of human dental enamel surfaces [21-24].

It is known that, the fractal and multifractal analyses have also been used to quantitatively characterize the 3-D rough surfaces in the field of dental materials [25-29].

The main purpose of this study was to investigate the effect of irradiation with the Er:YAG laser on the surface nanomorphology of human dental enamel and the resulting changes in crystal structures. The sample 3-D surfaces were examined by atomic force microscopy (AFM) and the data were estimated by statistical functions.

The protocol of this study was reviewed and approved by the Research and Ethics Committee at the Autonomous University of the State of Mexico (UAEM).

Caries-free bicuspid teeth extracted for orthodontic reasons from patients aged 15-17 years old, who reported no use of fluoride products other than fluoride toothpaste, were obtained with the patients informed consent. Teeth with caries, restorations, cracks, and defects in the structure or color of the enamel on the buccal surfaces or fluorosis were excluded.

Immediately after extraction, teeth were collected in 0.2 (wt/vol) thymol solution at 277 K for one month until the experiment was performed. Enamel fluorescence was evaluated with a laser fluorescence caries detection system DIAGNOdent® pen (DIAGNOdent, KaVo, Biberach, Germany), 2 teeth with sound enamel (values of 0-13, according to the manufacturer's specifications) were included in the study [30,31].

Afterwards, a diamond wheel saw (South Bay Technology, Inc., San Clemente, CA, USA) mounted on a cutter (South Bay Technology, Inc., USA) was used to obtain the samples under constant irrigation. One block (3 × 3 mm) from buccal surface was obtained from each tooth (one for group). Subsequently, all samples were rinsed (with deionized water) and dried at room temperature previous to AFM evaluation. The sample sizes was 1 × 1 mm.

As shown in Table 1, two slides of human dental enamel were divided into two groups: (n = 15, regions of interest (ROI) on each group. These ROI were selected through a random process from the AFM images obtained at next step.

Table 1: Details of the experimental and control groups tested in the study.

The energy levels were calibrated by the calipers of the equipment. A power meter (LaserMate-P, Coherent Co., Santa Clara, CA) was employed to measure periodically the energy delivered. The surface was scanned once by hand (18 sec) with the sapphire tip of the laser perpendicular to it, at a working distance of 1 mm and with distilled water irrigation (5.0 mL/m).

All data were analyzed using the SPSS 18.0 statistical package (SPSS Inc., Chicago, IL, USA). The measurements were analyzed using the Kolmogorov-Smirnov test to assess the distribution of the data. Afterwards, the one way analysis of variance (ANOVA) was employed for comparison among groups; if significant differences were found, Bonferroni or Tamhane's T2 post-hoc tests were used, depending upon Levene's test of homogeneity of variance. In all statistical analysis, the level of significance was stated at P < 0.05.

For the complete description of the 3-D surface properties it is necessary to study higher order functions. Usually, secondorder statistical quantities observing mutual relationship of two points on the surface are employed. The statistical functions are namely the autocorrelation function (ACF), the height-height correlation function (HHCF), and the power spectral density function (PSDF) [32].

In our study, the computational analysis of the AFM files was performed on each region of interest (ROI), based on the original algorithm and the determined graphs were in correlation with ISO 25178-2: 2012 [32,33]. 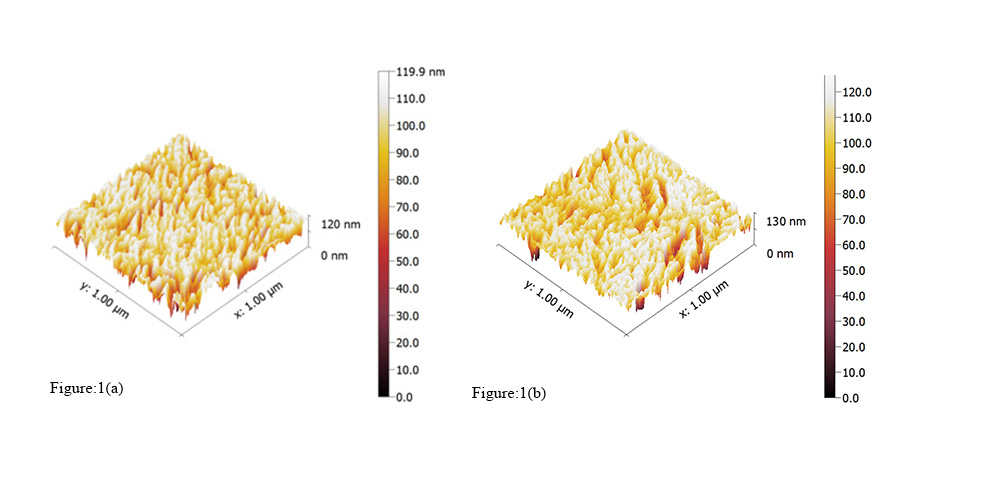 Group I has the most regular surface (Figure 1). This is qualitatively seen in Figure 1, a: image for group I has a lot of flat areas in comparison with group II. 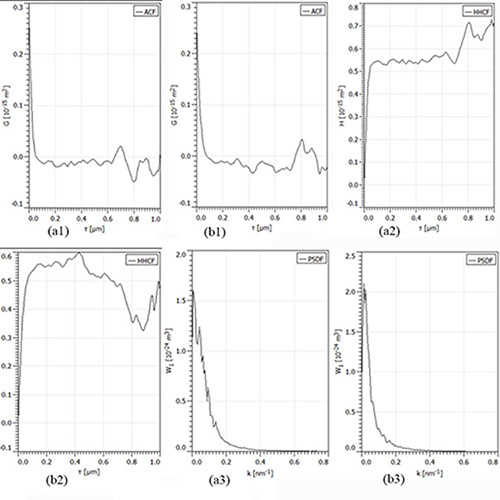 Figure 2:The ACF, HHCF and PSDF functions for samples of Figure 1, in horizontal direction, for: a) group I; b) group II. Scanning square areas of 1 µm x 1 µm.

In Figure 3 are shown the ACF, HHCF and PSDF functions for samples of Figure 1, in vertical direction, for: a) group I; b) group II. Scanning square areas of 1 µm x 1 µm. 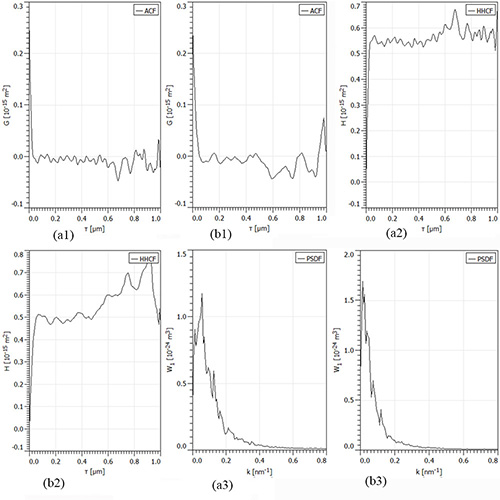 Figure 3: The ACF, HHCF and PSDF functions for samples of Figure 1, in vertical direction, for: a) group I; b) group II. Scanning square areas of 1 µm x 1 µm.

In Figure 4 are shown the radial ACF and radial PSDF functions for samples of Figure. 1, for: a) group I; b) group II. Scanning square areas of 1 µm x 1 µm. 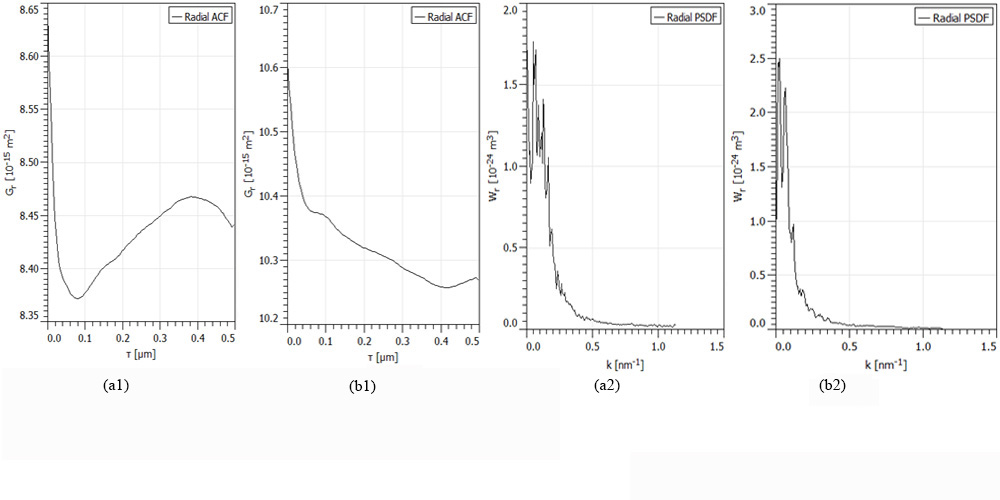 Figure 4: The radial ACF and radial PSDF functions for samples of Figure 1, for: a) group I; b) group II. Scanning square areas of 1 µm x 1 µm.

As shown in Table 2, the computational algorithm indicated that surface nanomorphology differ significantly of these two groups.

Table 2: The basic properties of the height values distribution (including its variance, skewness and kurtosis) of the surface samples, for scanning square areas of 1 µm x 1 µm. Statistically significant difference for all values: P < 0.05.

AFM, the statistical surface roughness parameters, and multifractal analysis are useful tools for providing information about the 3-D surface nanomorphology of human dental enamel irradiated with an Er:YAG laser and optimal surface characteristics in order to characterize its structural 3-D microrelief [21].

There are no previous reports regarding to surface morphology evaluation of human dental enamel irradiated with Er:YAG laser, using the statistical functions.

After the analysis of AFM images from the two groups, it can be seen that each preparation protocol is associated with a specific topography. This type of topography is characterized by a significant heterogenity of sample surfaces (random distributions with elevations and local irregularities between nano-asperities) in a 3-D surface map, as a result from their preparation protocol process and it can be characterized by the statistical functions employed.

The surface of group I was more regular, comparative with the other group, it could be explained by melting and subsequent homogeneous recrystallization resulting from the heat generated by laser irradiation, with a degree of asymmetry A for group I closer to 0.7. Moreover, the surface nanomorphology of Er:YAG laser irradiation (under group I conditions) was the most regular when multifractal analysis was carried out [21].

On the other hand, group II (no irradiated enamel) have a large area of closed enamel prism in the surface, attributable to the natural organization of this tissue, with the minimum value of A. Also, two grooves were present in the no irradiated surface, observed as irregularities.

It should be taken into consideration that random distributions and localized irregularities also characterized the irradiated surface. Along these areal damages, some local damages could be detected. Final surface morphology of human dental enamel depends on the protocol type, and on a choice of optimal variant requires a deeper insight on the 3-D surface patterns quality.

Investigations carried out confirm that the surface roughness can be described by statistical functions and provide valuable information in characterization and comparison of 3-D microrelief peculiarities of human dental enamel.

These types of analyses provide a basis for additional research and analysis with 3-D methods in medical image analysis and computer graphics.

Neither author has a financial or proprietary interest in any material or method mentioned. All authors read and approved the final manuscript.