For pharmaceutical tablet production, there are lots of commercial excipients available. All these excipients influence the drug release of tablet cores in different ways. In this project the influence of Carbopol 71G®, Carbopol 971P ®, Fujicalin ®, Neusilin US2 ®, Neusilin UFL2 ®, Pemulen TR-1 ®, Pemulen TR-2 ®, Sepistab ST 200 ® and Sepitrap 80 ® on drug release was investigated. Tablets were compressed with resveratrol as a model drug using an eccentric press. Tablets containing 2 wt.% of resveratrol which was mixed with a certain amount of excipient, in addition to 1 wt.% of talc, 1 wt.% magnesium stearate and Ludipress LCE. These products were compared with tablets without any excipients, but with all the other remaining components of the formulation. Drug release was in vitro investigated in dependence of time, according to European Pharmacopoeia (Ph. Eur. 2.9.3). It appeared that drug release depends on the qualities of the pharmaceutical additives. Tablets with Fujicalin ® and Sepistab ST 200 ® exhibit a rapid release and disintegration time, while the other pharmaceutical additives lead to a delayed release (retardation). Drug release kinetics was described by the mathematical model of Korsmeyer-Peppas.

Tablets are the best known and most frequently used pharmaceutical single unit dosage forms. Today more than 40% of all drugs were consumed in tablet form. Tablets could be economically produced by a machine in large quantities. More advantages are the good acceptance of the patients, the possibility for easy transport and storage [1]. The composition of different mixed substances allows to create formulations which releases the drug at the desired location in gastrointestinal tract (GIT). This means that the right combination of excipients tends to result in a less drug amount, which is necessary to achieve the same effects. As a consequence of this, fewer side effects of drug could be expected. Excipients are characterized with their fields of functions as base material, disintegrant, glidant, and lubricant, binder or granulating agent. Binders are used to enhance cohesion of powder particle and increase plasticity of tablets. Glidants and lubricants are flow aids, which improves tablet pressing process. Disintegrants enhance disintegration of tablets in GIT [1, 2].

Fujicalin ® includes calciumhydrogenphosphate and dicalcium phosphate anhydrous (DCPA) (Figure 1c). This fillers could be used for direct compression and to receive hard tablets by using only small low compression force. It is a porous product with a low particle size of 115 µm, which is able to adsorb liquid oily substances. Fujicalin ® doesn't act as disintegrant but improves the decay of tablets. Because of the fact that porousity overcomes tablet pressing, water is enabled to penetrate the tablet faster [5, 6].

Sepistab ST 200 ® is a commercial excipient based on a mixture of native starch and pregelatinized starch, which act as binder, glidant and disintegrant [6, 7]. Sepitrap 80 ® is an excipient comprised from polysorbate 80 (Figure 1d) which is derived from polyethoxylated sorbitan and oleic acid [8]. In tablets it works as emulsifier to enhance bioavailability for poorly water soluble drugs [6, 9]. Neusilin ® is based on a totally synthetic magnesium aluminometasilicate (Figure 1a). Neusilin US2 ® is granulate, while Neusilin UFL2 ® is a powder. These porous products increase flowability of powder mixtures and hardness of resulting tablets [10]. Carbopol 71G NF ® and Carbopol 971P NF ® are a commercial names for the same type of polyacrylic acid (Figure 1e). While Carbopol 71G NF® exhibits a granular physical form, Carbopol 971P NF ® is in powder form. It can be used for direct compressing and leads to extended drug release of resulting tablets [11]. Pemulen ® is a cross linked copolymer of acrylic acid and a hydrophobic comonomer with high molecular weight (Figure 1f). Table 1 summarizes all described excipients, with its chemical name.

Table 1: Summarisation of commercial and chemical names of excipients

Pemulen TR-2 ® differs from Pemulen TR-1 ®, because of the degree of viscosity provided to the final emulsion. It is most commonly used as emulsifier for oil-in-water emulsions and could be used to increase bioavailability for poorly water soluble drugs like resveratrol. Resveratrol is a secondary plant compound with poly phenolic structure (Figure 1b) [12, 13].

Resveratrol occur in form of trans and cis. Exposure of UV radiation leads to conformation change from trans to the less stable cis form [15]. It works as antioxidant, counteract herpesvirus and mycosis and shows providing effects as anti-ageing or anticancer products [16, 17]. 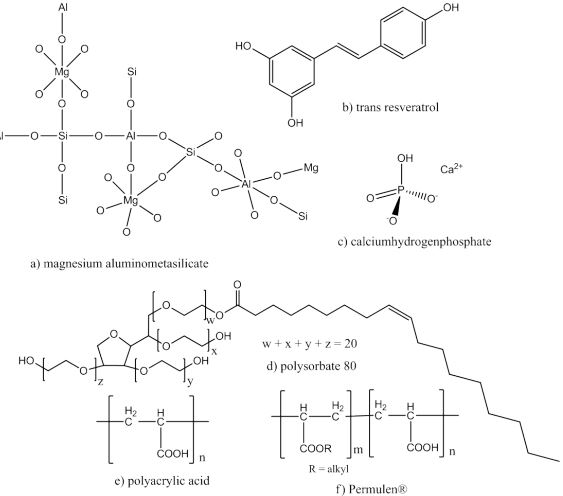 Trans resveratrol could be found in raspberries, mulberriy, plums, blueberries, peanuts, and grapes [18]. The content of resveratrol in wine is usually 2-4 mg/L. Solubility of trans resveratrol depends on temperature and content of ethanol in dilution medium. The solubility of resveratrol in ethanol is 50 g/L But resveratrol is insoluble in vegetable oils [19]. Its solubility in water differs from 19.6 mg/L at 25°C to 21 mg/L at pH 7.4 and 37 °C [20, 21]. This is the reason for poor bioavailability of resveratrol in spite of its fast absorption at intestinal tract [22]. Release kinetics of resveratrol could be described by the law of Korsmeyer-Peppas (eq. 1) as follows [23]:
Mt/ M∞ = K.tn (eq.1)
Mt/ M∞ = drug released fraction at release time t,
k = constant corresponding the kinetic characteristic of drug/ polymer system,
n = release exponent, influenced by the drug release mechanism and shape of tablet.

If the value of n is = 0.45 corresponds to a Fickian diffusion mechanism. Values of 0.45 < n < 0.89 indicates a non-Fickian transport. If n = 0.89 a case II transport or zero order release with constant drug release during time and if n is higher 0.89 a super case II transport occurs [24]. Former projects reveals, that law of Korsmeyer-Peppas is a good tool to describe drug release kinetics from matrix tablets and from tablets with different coatings [25-27]. In this project the influence of described excipients on release of resveratrol was investigated.

Preparation of Tablets and Physical Tests:

Calibration curves were obtained by measuring solution of resveratrol in various dilutions with UV spectrometer (V-630, Jasco, Japan). UV absorption of the model drug resveratrol in ethanol (96 Vol %) was measured to test the uniformity of drug content. Phosphate buffer (pH 7.4) was used as the intestinal fluid for drug release studies. Drug release was studied using a dissolution apparatus with a paddle stirrer (BDH Prolabo, France) with paddle rotation of 100 rpm at a temperature of 37°C ± 0.1°C. All measurements were done under light protection with a three times repetition.

In table 2 all powder mixtures are summarized which were able to be pressed using direct compression.

Table 2: Summarisation of powder mixtures which were able to be pressed

It reveals that only higher contends of Fujicalin ®, Sepistab ST 200 ® and Carbopol 71G ® could be used for direct compression with eccentric tablet press. All tablets conform to requirements of European Pharmacopoia [23]. Table 3 summarizes the average and standard deviation from hardness testings (n = 10) together with the angle of repose of each powder mixture before pressing.

Table 3: Summarisation of angle of repose of each mixture together with the average (AV) and standard deviation (SD) of hardness testings from resulting tablets (n = 10).

The table shows that apart from the mixture with 50%-w/wi of Sepistab ST 200± all produced tablets reveals comparable hardness. The angle of repose provide informations of flow-ability of powder mixtures. An angle < 25° indicates excellent flowability, while 25°-30° is good, 30°-40° is acceptable and an angle > 40° reveals really bad flowability [2]. Figure 2 shows the results of disintegration tests of Fujicalin ® and Sepistab ST 200 ®. 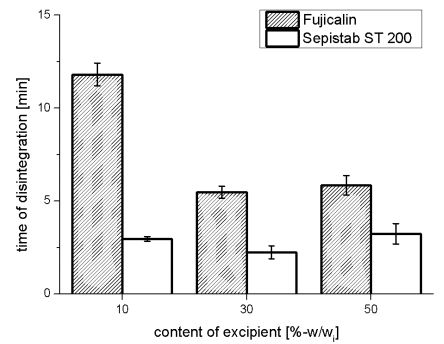 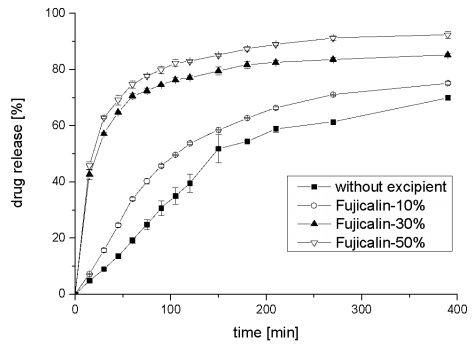 As expected from disintegration tests, drug release kinetiks of tablets containing 30%-w/wi and 50%-w/wi of Fujicalin ® are approximately similar and much faster than mixture with 10%-w/wi . Only small effects could be observed with increasing the amount of Fujicalin ® in powder mixture higher than 30%-w/wi . In comparison to tablets without any excipients drug release was accelerated with all Fujicalin ® including samples. Figure 4 shows averages and deviations of released resveratrol from tablets with a content of 10%-w/wi , 30%-w/wi,50%-w/wi of Sepistab ST 200 ®, and 10%-w/wi of Sepitrap 80 ® in comparison to tablets without any excipients. 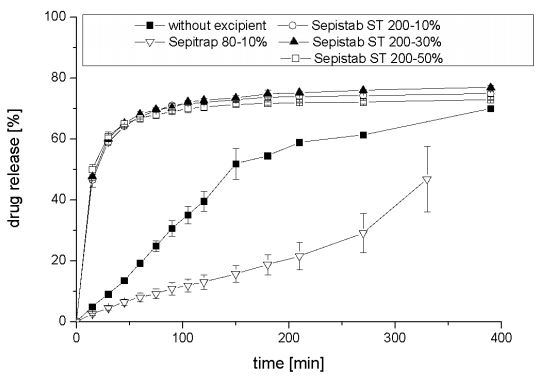 Drug release profiles of tablets incorporating Sepistab ST 200 ® are very close to each other and faster than the mixture without any excipients. It could be shown, that only a small amount of Sepistab ST 200® like 10 %-w/wi is required, to achieve a rapid drug release. This is a positive incident because of the fact, that excipients are very expensive in the majority of cases. Usage of 10%-w/wi of Sepitrap 80® leads to a delayed release (retardation) in comparison to tablets without any excipients. These effects also occur in drug release profiles of Carbopol 71G ® and Carbopol 971P ® a which are shown in Figure 5. 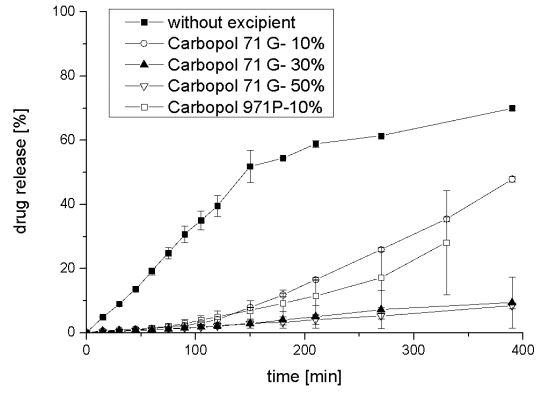 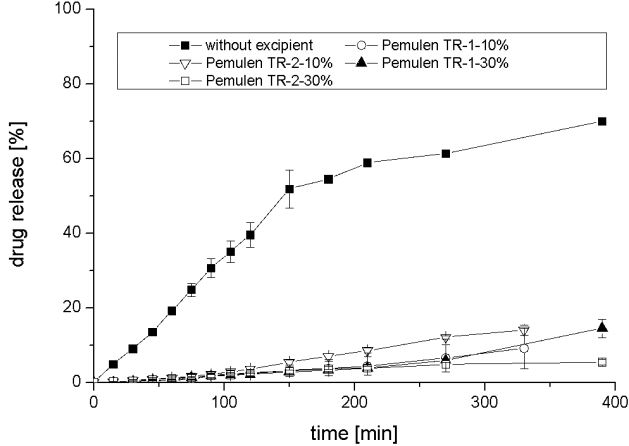 Figure 6 proves that sustained release could be achieved with Pemulen TR-1® and Pemulen TR-2 ®. While drug release profiles of 10%-w/wi , and 30%-w/wi of Pemulen TR-1 ® are quite similar, release of tablets is more delayed with increasing content of Pemulen TR-2 ®. Neusilin US-2 ® exhibits the same properties. This is shown in figure 7, where the averages and deviations of released resveratrol from tablets with a content of 10%-w/wi , and 30%-w/wi of Neusilin US-2 ®, and 10%-w/wi of Neusilin UFL 2 ® are compared to tablets without any excipients. 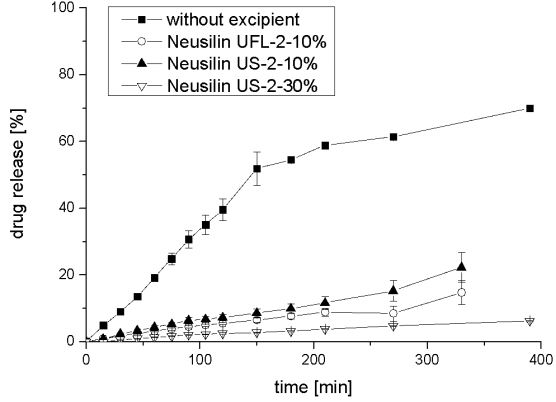 In comparison to tablets without any excipients drug release of tablets containing Neusilin ®  is delayed. Release of resveratrol with contend of 10%-w/wi Neusilin US-2 ® was significantly faster than mixture with 30%-w/wi of Neusilin US-2 ® . This could be shown by the lower value of k, which is received from fitting release kinetics with the model of Korsmeyer-Peppas summarized in Table 4.

Table 3: Summarisation of angle of repose of each mixture together with the average (AV) and standard deviation (SD) of hardness testings from resulting tablets (n = 10).

Fitting results provides very high value of k for tablets containing Fujicalin ® and Sepistab ST 200 ®. This provides the rapid release of these formulations in comparison to all the other used excipients. With the exception of 10%-w/wi of Fujicalin ® the values of n are smaller than 0.45. This indicates the rapid drug release of a Fickian diffusion mechanism, in which the rate of diffusion is much smaller than the rate of relaxation [28]. Values of Fujicalin ® (10%-w/wi ), Neusilin US-2 ® (30%-w/ wi ), Pemulen TR-2 ® (30%-w/wi ), Carbopol 971P ®(10%-w/wi ) and values of tablets without any excipients are 0.45 < n < 0.89. This reveals to non-Fickian transport, where the diffusion and relaxation rates of the matrix are comparable. Values for n > 0.89 corresponds to a super case II transport diffusion [28].

Different physical properties of powder mixtures (e.g. flow ability, uniformity) and tablets (mass, drug content, hardness) were tested to prove that they conform the physical requirements. It could be shown that all investigated excipients influence the drug release of tablet cores in different ways.

In comparison tablets with Fujicalin and Sepistab ST 200 leads to a rapid release, while the other types of excipients lead to retardation. Because of the delayed release combined with sensibility of the model drug, it wasn't possible to investigate the influence of Permulen and Sepitrap 80 on solubility of resveratrol precisely. This would be analysed in future work.

The authors would like to thank Mr. B. Thomas and whole workgroup of Prof. Dr. Kumpugdee-Vollrath for support as long as the Central SME Innovation Program (ZIM) along with the Federal ministry of Economics and Technology (BMWi) for some financial support. Thanks is also given to Mr. Helms from Seppic GmbH Germany as well as Fuji Chemical Industry, Japan and BASF Germany for providing materials and informations.