The goal of this study was to evaluate the feasibility of a wrist arthroscopy using a robot-assisted prototype controlling the movements of the camera with the foot.
A 2.4 arthroscope was introduced using 3-4 portals and then 4-5 portals in a cadaveric wrist installed in a frame carrying an endoscopic camera mobilized in the 3 plans of space by foot-controlled engines. The vision of osteoarticular and intracarpal ligament anatomical structures was similar to the conventional technique. The arthroscope was reintroduced 3 times. We regretted a simultaneous movement of rotation of the wrist and of the arthroscope.
Our study has demonstrated the feasibility of a wrist arthroscopy using a new free hand camera, robot-assisted prototype.

Figure 1: Installation of a robot-assisted free hand arthroscope prototype. A left fresh cadaveric forearm was set up in a traction frame on which a hoop was attached where a tray carrying the endoscopic camera could glide. The hoop was motorized allowing rotation movements around a horizontal axis (solid arrow). The tray could perform rotation movements around a vertical axis (curved dotted arrow) and translation movements, centrifuge or centripetal (straight dotted arrow). All in all, the camera can perform movements in every plans of space around the dorsal side of the wrist. 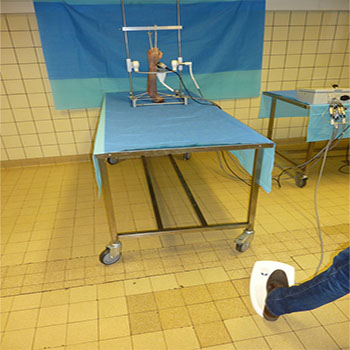 Figure 2: Installation of a robot-assisted free hand arthroscope prototype. In the background, the prototype described in figure 1. On the right, electric wiring for the operation of the hoop and tray going to a central unit connected to the column of arthroscopy (non visible here). On the foreground, the foot controller which enables to control the endoscopic camera in every plans of space around the dorsal side of the wrist.

The evaluation of the results consisted in the verification that the robot-assisted arthroscopic exploration of the radiocarpal joint through 3-4 and 4-5 portals matched the conventional technique, especially by visualizing the main anatomical structures: scapholunate and lunotriquetral ligaments, TFCC, articular surfaces of the radius and the 3 bones of the first carpal row.

The vision given by robot-assisted arthroscopy of the radiocarpal joint using 3-4 and 4-5 portals was similar to the vision given by the conventional technique and enabled to visualize every osteoarticular and intracarpal ligament structures (video 1). The arthroscope involuntarily exited the radiocarpal joint 3 times, its reintroduction was easy every time. The movements of the arthroscope matched in real time the movements of the foot controller but their magnitude was inferior due to a simultaneous movement of rotation of the wirst around the axis of the forearm.

(Video)
Video 1: Radiocarpal arthroscopy using a free hand robot-assisted prototype. Outside view: after washing of the joint with a syringe, the mobilization of the arthroscope placed in 4-5 portal is tested in every plan, then a mandrel is placed in 3-4 portal and pushed inside the joint. The inside view is synchronized.

In orthopedic surgery, robotic surgery is used for open knee or hip surgery. The most frequently used robots are the Robodoc® wich performs automatic bone sections for prosthetic knee surgery, and its femoral version wich performs automatic preparation of the fermoral shaft for prosthetic hip surgery [2, 3].
For surgery of soft tissues, robotic surgery is used for laparoscopies in urology, digestive surgery and gynecologic surgery [4-6]. The most frequently used robots are the Da Vinci® et le Free-Hand®. The latter carries an infrared guided arm wich enables to mobilise the endoscopic camera using the movements of the head of the operator. The advantages of this "free hand camera" technique are, according to the authors, to either perform the surgery without an assistant, therefore reducing the cost of the procedure or using the freed hand to facilitate the achievement of complex gestures [7, 8].
In arthroscopic wrist surgery, in order to free the hand holding the camera, some authors have offered to use the Free Hand® device, controlled by the head movements of the operator [1]. This device has been designed for laparoscopic surgery and the authors encountered difficulties orienting the image on the screen as well as steric hindrance leading to conflicts with the instruments in extreme positions. Another inconvenience was that the movements of the camera could only be controlled in one space plan at a time, needing successive maneuvers to lead the camera from one point to another, slowing considerably the rhythm of the procedure.
The advantages of our prototype enabled to rectify the inconveniences of the Free Hand® device. We encountered no difficulty of orientation of the image on the screen since the movements of the camera went the same way as the movements of the foot controller, nor did we encounter conflicts with the instruments in extreme positions. Our prototype relating to robotic arms, the foot controlled joystick was perfectly synchronized to the engines of the hoop and tray. It enabled to obtain fluent, real time movements of the camera in the 3 plans of space. Among the disadvantages, we experienced involuntary exits of the arthroscope from the radiocarpal joint which could be avoided by applying a counter bearing at the anterior face of the wrist. The loss of magnitude of the movements of the arthroscope was due do an insufficient fixation for the forearm and hand of the cadaver and should be avoided by a more rigid fixation to the traction frame. In clinical practice this problem should not be encountered with an upper limb immobilized in a conventional traction device.
All in all, our study demonstrated the feasibility of wrist arthroscopy using a free hand camera robot-assisted prototype. It remains to be developed to be adapted to clinical practice.

To iiN medical™ that graciously provided the prototype and the endoscope used for the procedure and offered the anatomic specimen. To the Institut d'Anatomie Normale of Strasbourg who graciously loaned its premises.