We report a case of bowstringing after trigger finger release, related to laxity of thumb MCP UCL. A 58-y-o woman was referred to our hospital having suffered from impairment of right thumb opposition after trigger thumb treated in another center. Flexor pollicis longus could be seen as a bowstring and thumb MCP UCL was unstable. UCL was shrinkaged. After operation, there was no laxity neither bowstringing anymore. When there is a MCP laxity during a trigger finger operation, we recommend adding a UCL shrinkage at the same time.

Bowstringing commonly occurs after excessive resection of proximal pulley (especially A2 pulley) [3]. After A2 pulley resection, bowstringing manifests as a protrusion of the flexor tendon into the palm with finger flexion. However, there is no previous report about correlation between bowstringing and laxity of thumb metacarpal phalangeal (MCP) ulnar collateral ligament (UCL).

We report a case of bowstringing after trigger finger release related to laxity of thumb MCP UCL.

A 58-year-old right-handed woman suffered right trigger thumb treated by surgery in another center. One year after the operation, she was referred to our hospital having suffered from impairment of right thumb opposition (It was impossible to do active flexion of IP joint during thumb opposition). On clinical examination, flexor pollicis longus (FPL) could be seen as a bowstring at the base of the proximal phalanx (Figure 1) thumb MCP joint was unstable. Valgus stress testing was positive in both 0°and 30°MCP joint flexion with thumb pronosupination at zero position (Figure 2 A-D).

when MCP joint was stabilized in the frontal plane, active flexion of IP joint was obtained in all positions.

Figure 1: Flexor pollicis longus can see as a bowstring at the base of phalangeal bone (A: right, B: left). 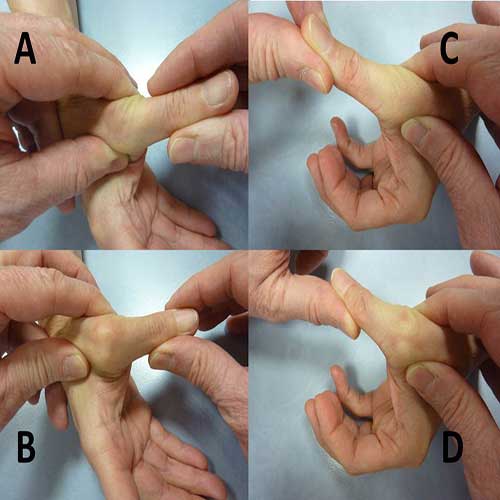 On a visual analogic scale, pain score was 1/10. The Quick D.A.S.H. functional score of upper limb was 25.00/100. Radiography showed no typical osteoarthritis of the thumb (Figure 3A, 3B). From these findings, she was suspected as bowstringing related to laxity of UCL.

Figure 3: Radiography showed no typical osteoarthritis at the thumb (A: Postero-anterior view, B: Lateral view).

Patient complained 2 problems as an occupation of anesthesiologist: instability of thumb MCP and residual bowstringing during thumb flexion. In order to solve these problems, we proposed shrinkage of the thumb MCP UCL.

Intraoperative findings, UCL repair was performed using ulno-lateral incision under locoregional anesthesia. There was a loosening of UCL (Figure 4A) . UCL was shrinkaged by using 2-0 monocryl suture (Figure 4B) . After operation, there was no laxity anymore (Figure 4C) . Brace was placed for four weeks. 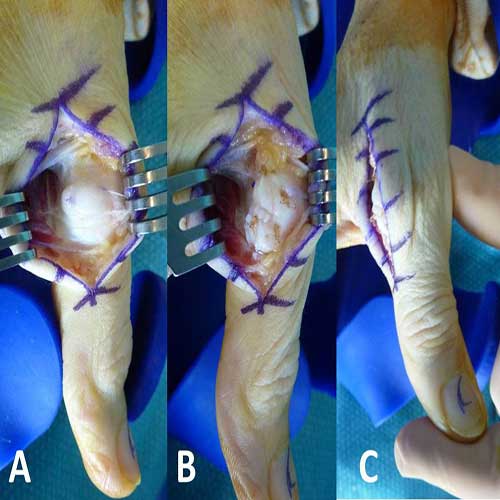 Figure 4 (A): There was loosening of UCL from 1st base of phalangeal bone. (B): UCL was shrinkaged by using 2-0 monocryl. (C): There was no laxity of UCL at the thumb.

At 6 months follow-up, the patient was satisfied. Pain score was 0/10 and Quick D.A.S.H. functional score was 6.82/100. We noted no clinical recurrence of bowstringing (Figure 5) . 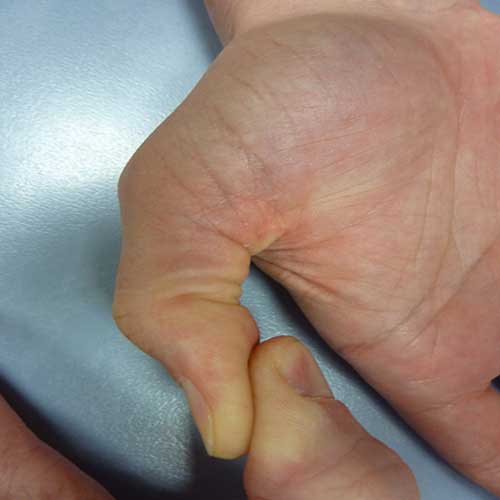 Figure 5: There was no clinical recurrence of bowstringing at the base of phalangeal bone.

Trigger finger is very common in hand surgery. Open release of the A1 pulley has been used to treat trigger digits for more than 100 years. Surgical complications are rare but include severe problems such as bowstringing, digital nerve injury, and continued triggering [4-6].

When bowstringing occurs, it is difficult to manage its operative treatment. Concerning the mechanism of bowstringing, as the flexor tendons migrate to the volar side after resection of proximal pulleys (especially A2 pulley), the flexion moment arm is increased. Thus the flexor tendons gain an increased mechanical advantage over the extensor tendons resulting in limited digital extension [7].

The main function of the pulley system is to maintain the flexor tendons close to the bone. A loss of 1 or several pulleys will cause bowstringing, which may lead to a loss of strength and a decreased ROM (range of motion). If bowstringing occurs without limitation of ROM, A2 pulley is probably intact, because of A2 pulley contributed least to maintain the arc of finger motion [8].

If both A1 and oblique pulleys are cut, considerable bowstringing of the FPL will be observed [8]. In a recent report, partial injuries of the A2 pulley may cause significant tendon bowstringing. Especially a rupture from the distal to the proximal side of the A2 pulley will result in more bowstringing [9]. Oblique pulleys are also important to keep the flexor tendons close to the phalanges to assure optimal mechanical efficiency [10]. In our case, there was no limitation of ROM at the thumb before and after operation. A2 pulley was probably intact after the trigger thumb operation.

In our case, bilateral MCP instability could be due to congenital laxity because the patient did not mention any particular trauma. Anatomical route of the FPL changed after the operation of trigger thumb. When IP joint was flexed, MCP joint was radially shifted and FPL was more tensed in order to move radially than the anatomical route of the FPL. From these mechanisms, bowstring probably occurred. We performed to reroute the FPL anatomically by UCL shrinkage without pulley reconstruction. Bowstring disappeared. These operative results demonstrated that A2 pulley has not been damaged and preserved almost normal function.