Citation: Ng YH and Tan DMK. (2017). Anterior Elbow Dislocation with Radial Head Fracture- A Variant of the Terrible Triad And a Review of the Literature. Mathews J Orthop. 2(1): 014.

Terrible triad injuries of the elbow typically present as posterior elbow dislocations with an associated radial head and coronoid fracture. We report an atypical presentation of this injury pattern with an anterior dislocation of the elbow with a radial neck and coronoid tip fracture, as well as a humeral avulsion of the lateral ulnar collateral ligament (LUCL). This patient underwent open reduction and internal fixation of her radial neck fracture and suture anchor fixation of the avulsed LUCL through a lateral approach to the elbow. She has since regained painless and functional range of motion of her elbow. This case highlights the importance of the injury mechanism, fracture pattern and intraoperative stress tests in identifying the crucial injured components of the elbow. Addressing the bony injuries alone without reconstituting the soft tissue restraints of the elbow would invariably lead to persistent instability, arthrosis and poor outcome.

The patient is a 56-year old lady who fell on a flexed right elbow after tripping over a carpet. At the Emergency Department, initial radiographs revealed an anterior dislocation of the right elbow with a radial neck fracture (Figure 1). 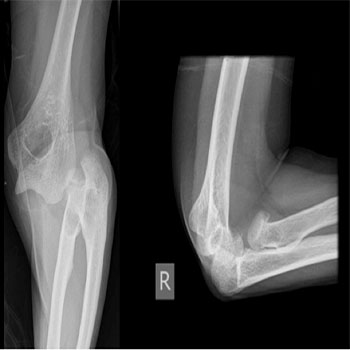 Closed reduction was successfully performed under conscious sedation by extending the elbow and applying a posteriorly directed force on the proximal ulna. She was subsequently followed up in the Orthopedic Specialist Outpatient Clinic and computerized tomography scans revealed a coronoid tip fracture as well as an impacted, anteriorly angulated radial neck fracture. Stress radiograph views done in the clinic revealed an incongruously reduced elbow joint (Figure 2). 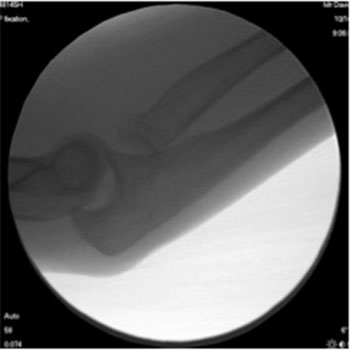 The patient underwent surgical fixation of her right elbow fracture-dislocation the following week. The radial neck was found to be impacted at the anterior metaphysis with some metaphyseal comminution and the annular ligament was partially torn but the proximal radioulnar joint (PRUJ) was still reduced. The radial neck fracture was reduced prior to fixation with a 2.0mm precontoured locking plate. The lateral ulnar collateral ligament (LUCL) and the common extensor origin (CEO) were repaired back to the isometric point of the lateral epicondyle using a 2.9mm suture anchor (Figure 3). Post-fixation, the elbow remained concentrically reduced from 30� to 140� and on-table valgus stress test performed with 30� elbow flexion and full forearm pronation was stable suggesting a functionally intact aMCL, hence the medial side was left alone. Early active elbow range of motion exercises were started the following day. 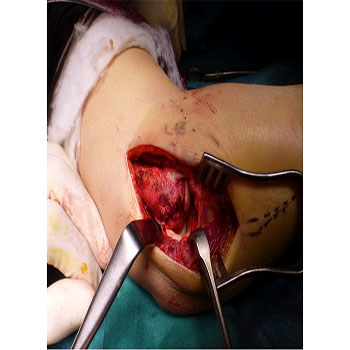 At the 8-month follow-up, the patient achieved painless range of motion from 15-140°,, with full pronation and supination range of motion, without elbow instability (Figure 4). The patient was also tested clinical for signs for generalized ligamentous laxity during her outpatient follow-up in view of her atypical fracture configuration, but her Beighton score was found to be 0. 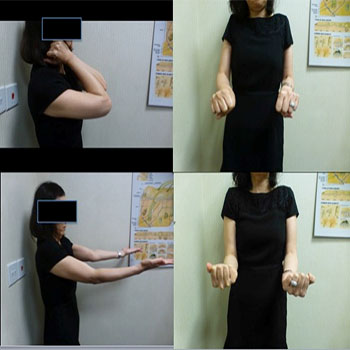 An anterior dislocation of the elbow with a radial neck fracture, in the absence of an associated olecranon fracture, is a rare injury pattern that has not been previously described. The rarity of such an injury is evident when one considers the anatomy of the elbow joint and its stabilizers.
The ulnohumeral articulation is the major stabilizer of the elbow joint. The inherent stability of this articulation is conferred by the congruity of this ginglymoid joint, with the trochlea subtending an arc of nearly 300°, and the trochlear notch of the proximal ulna encircling nearly180° of the trochlea. The coronoid is a key anterior and varus buttress of the elbow joint, and contributes to valgus stability through the attachment of the anterior medial collateral ligament (aMCL) to the sublime tubercle. The olecranon forms the large posterior bony buttress of the ulnohumeral joint, constituting the posterior column in the ring of elbow stabilizers, which would usually need to be compromised for an anterior dislocation to take place. This explains the typical transolecranon fracturedislocation pattern in most anterior elbow dislocations.
There is limited literature on anterior elbow dislocations in the absence of olecranon fractures given its rarity and most have been reported in the paediatric age group. The relative ligamentous laxity and pliability of bone in children explains the atypical pattern of these injuries in this age group. However, the biomechanics of such an injury in the adult population, in the absence of any underlying ligamentous laxity or bony dysplasias, could represent a variant presentation of the terrible triad. There have been few sporadic case reports on anteriorelbow dislocations in the absence of an olecranon fracture in the adult population in existing literature (Table 1). Of the 6 case reports we found, 5 were simple dislocations with no acute bony fractures, and half of these reported cases were a result of falling on a flexed elbow, the typical mechanism in such injury patterns.

The terrible triad injury of the elbow was first described by Hotchkiss as a complex elbow dislocation in association with a radial head and coronoid process fracture. A posterolateral rotatory instability pattern as described by O’Driscoll has been accepted as the mechanism underlying this injury pattern with a sequential failure of the osseous and capsuloligmentous structures surrounding the elbow occurring in a predictable manner [1]. This pattern of elbow instability was demonstrated by manually dislocating the elbow in a posterolateral direction after sectioning all of the capsuloligamentous constraints except the aMCL.
Intraoperative findings of our reported case revealed a similar injury pattern of circumferential soft tissue disruption around the elbow suggestive of a posterolateral rotatory instability (PLRI) type of injury with a completely avulsed LUCL and CEO, as well as a pMCL injury, consistent with stage 3a in the spectrum of elbow instability as described by O’Driscoll [1]. This pattern of injury would require valgus and supination deforming forces at the elbow, which could be created during a fall on a flexed elbow when the body weight falls on the “inside” of the elbow. Falling directly over the elbow would produce a pure hyperflexion type injury, which typically results in an anterior transolecranon fracture-dislocation. Following the sequential disruption of the LUCL, coronoid-anterior capsule unit and pMCL, the flexion moment about the destabilized elbow could then easily clear the olecranon from the trochlea during the moment of valgus overload at the time of injury, dislocating the proximal ulna anteriorly while hinging on the intact aMCL with an anterolateral rotatory moment. The anterolateral rotatory moment would have then subsequently led to the anteriorly angulated radial neck fracture which at the same time offloads the medial column and protects the olecranon.
The importance of differentiating this injury pattern from an anterior Monteggia fracture-dislocation cannot be overemphasized, and the key distinguishing feature is the articular congruency of the PRUJ. There should be a low threshold to proceed with more advanced imaging modalities like computerized tomography (CT) scans if plain radiographs do not offer adequate visualization of this joint. Anatomic reduction of the ulna with accurate restoration of length and alignment usually allows for successful closed reduction of the radial head with good treatment results.
An anterior transolecranon fracture-dislocation, is usually a result of osseous failure rather than ligamentous failure. Ring et al reported one of the largest series of transolecranon anterior fracture-dislocations of the elbow with 17 cases over a 10-year period and observed the association of this injury pattern with large coronoid fracture fragments with relative sparing of the collateral ligaments and radial head. The authors emphasized the need to accurately restore the bony contour of the trochlear notch and securely fix any coronoid fracture fragments for good functional results. Post-traumatic instability and arthrosis are rarely seen following these injuries [2]. On the other hand, terrible triad injuries are invariably associated with severe disruptions of both soft tissue and bony stabilizers of the elbow, with historically poor treatment outcomes. Adherence to a consistent surgical protocol with an algorithmic approach to the assessment and management of both osseous and ligamentous injuries, together with a strict postoperative rehabilitation regime of early mobilization, is essential to obtain satisfactory functional outcome. The surgical protocol described by Pugh et al, which is now commonly adopted by most elbow surgeons, yielded a mean flexion arc of 112°, with a mean Mayo Elbow Performance Score of 88 points which corresponds to 28 out of 36 elbows with goodto-excellent patient-reported functional scores [3]. This underpins the importance of identifying terrible triad injuries of the elbow, including all its atypical presentations, in order to address all the injured components comprehensively and methodically.
Our case report suggests that circumferential disruption of elbow in a PLRI pattern can also culminate in an anterior elbow dislocation. As most terrible triad elbow injuries are a result of high velocity trauma with multiple associated injuries such atypical presentations should be the rule rather than the exception. The subtlety of signs that point to a potentially destabilized elbow compounds the difficulty in identifying and managing these complex injuries. The coronoid fractures seen in terrible triad injuries are typically small transverse fractures whose size is frequently underestimated on plain radiographs [4-10]. While the need to fix coronoid fractures in terrible triad remains controversial, its presence almost always indicates loss of the anterior capsular constraint of the elbow. Failure to obtain true lateral radiographs of the elbow in the setting of polytrauma may also cause one to miss subtle signs of a subluxed or incongruously reduced elbow joint which may have progressed into a chronically dislocated elbow by the time it is recognized. It is therefore essential to maintain a high index of suspicion to avoid the significant morbidity that could arise from missing or under-diagnosing such injuries.