1Professor of Internal Medicine from the Federal University of the State of Rio de Janeiro, UNIRIO, Gaffrée Guinle University Hospital.

Objective: The objective of this study is to estimate the prevalence of vitamin D deficiency among HIV-infected outpatients treated at a university hospital in Brazil. Look for associations between vitamin D deficiency and factors such as age, sex, time since diagnosis, cumulative time of use of different antiretroviral count, CD4 + lymphocytes, and plasma viral load of HIV.
Design and Methods: We analyzed 125 patients aged above 18 years, of both sexes, who had recorded measurements of 25(OH)D, CD4+ lymphocyte count, and viral load count, all obtained in the same sample. Were excluded from the study any who had taken any vitamin supplement in the last year, carriers of chronic renal failure with creatinine clearance less than 30 ml/min, or liver failure. Linear regression was used to analyze continuous variables or Student`s t-test for categorical variables. The deficient patients were whose 25(OH)D concentrations were below 32 ng/dL. Results: A total of 72.8% of patients had vitamin D deficiency. It was found no association between vitamin D and the variables: age, gender, time since diagnosis, duration of use of antiretroviral therapy, HIV viral load, and with none current antiretroviral regimen. A trend for the association was found between the plasma concentration of vitamin D and CD4+ lymphocyte count (negative β, R2 = 0.029, p = 0.058). There was a statistically significant association between the cumulative usage time of efavirenz and plasma concentrations of vitamin D (negative β, R² = 0.071 and p = 0.03).

The vitamin D (VD) deficiency, measured by serum 25(OH)D, is an underdiagnosed condition and generally not evaluated by clinicians, especially those located in countries abundant in sunlight. Part of this omission is due to the ignorance of the consequences of subclinical deficiency of this nutrient and the inability of professionals to recognize clinically manifest forms of VD scarcity [1].
It is estimated that around 36% of healthy adults and 57% of hospitalized patients in the United States (U.S.) have some degree of VD deficiency [2]. This condition is searched at the highest rate in residents of countries with less sun exposure, elderly, malnourished, and in patients with acquired immunodeficiency syndrome (AIDS) [3,4].
The VD is considered a steroid hormone since the ’60s and has its principal function attributed to the metabolism of calcium and phosphate. This control is accomplished through a homeostatic balance of the parathyroid gland, bone, kidney, and intestine [5]. Besides classic rickets in children and osteopenia in different degrees in adults, chronic and subclinical VD deficiency has been implicated as a risk factor in pathogenic processes such as metabolic syndrome, cancer, and autoimmune diseases [6-
The research interests of the various metabolic interactions caused by VD deficiency in person with AIDS are: cellular immunity dysfunction, predisposition to opportunistic infections, increased risk of Immune Reconstitution Inflammatory Syndrome (IRIS), interactions with antiretroviral treatment, increase in the prevalence of anemia, increased prevalence of osteoporosis, and increased overall mortality due to cardiovascular complications of metabolic syndrome [10-15].

We revised 400 records from the Immunology outpatient clinic from the Gaffrée Guinle University Hospital - the Federal University of the State of Rio de Janeiro, attended from October 2013 through November 2013. Patients who were older than 18 years, of both sexes, who had recorded measurements of 25(OH)D, CD4+ lymphocyte count, and HIV viral load performed in the same sample were included in the study. In this sample, none of the patients had recorded use of any type of vitamin supplement within the last year, chronic renal failure (creatinine clearance inferior to 30 ml/min) or liver failure, which screening is performed by history, physical examination, and biochemical routine.
In total 125 patients who met the inclusion criteria were selected for the study. As the request of plasma 25(OH)D has become a routine test for monitoring HIV-infected patients in this service only in the second semester from 2013, 275 patients were excluded because of the lack of 25(OH)D in the chart.
The following variables were analyzed: sex, age (years), time since diagnosis of HIV infection (months), the historical use of antiretroviral drugs, cumulative time of use of different antiretroviral drugs (months) until the date of the collection of the samples, plasma HIV viral load, CD4+ lymphocytes, and 25(OH)D plasma concentration. The count of CD4+ lymphocytes was categorized into four groups: 1-100 cells /mm³, 101- 350 cells/mm³, 351-500 cells/mm³, and > 500 cells/mm³. The value of plasma HIV viral load was expressed in logarithms. The plasma concentration of 25(OH)D was also categorized into four groups: 32 ng/dL. Patients whose VD concentrations were inferior to 32 ng/dL were considered deficient.
The database was constructed in SPSS version 17.0 software (SPSS Inc., Chicago, IL) We performed the study in the series of cases of the association between the concentration of VD, considered response variable, and the explanatory variables: sex, age, time since diagnosis, duration of antiretroviral treatment, accumulated time of use of different antiretroviral drugs. The correlation between the concentration of VD and continuous variables was performed by simple linear regression, yielding the angular coefficient (β), determination coefficient (R²) and p-values. The mean VD in different categories was compared using the Student`s t-test. The level of statistical significance in all analyzes was set at 5%. The study was approved by the local ethical committee

We obtained the descriptive characteristics of the sample+ (125 patients). Table 1 shows the data on gender, age, use of antiretrovirals, CD4+ lymphocytes, status of viral load, HIV viral load, and VD concentration.

Variables: age, sex, duration of antiretroviral, and time since diagnosis were not statistically significant associated with plasma concentrations of VD in the group studied. The correlation between the age variable and serum VD produced an R2 = 0.001, p = 0.795. The mean plasma concentration of VD were not statistically significant different between males (26.69 ± 12.72 ng / dL) and females (26.36 ± 11.68 ng / dL) with p = 0.879. A relationship between duration of use of antiretrovirals and VD concentration was not significant either, (R2 = 0.008, p = 0.316). The time since HIV infection diagnosis were not correlated to plasma concentrations of VD analyzed by simple linear regression (R² = 0.009 and p = 0.281). 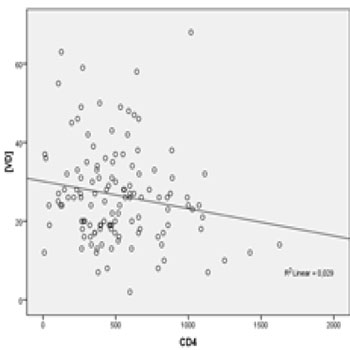 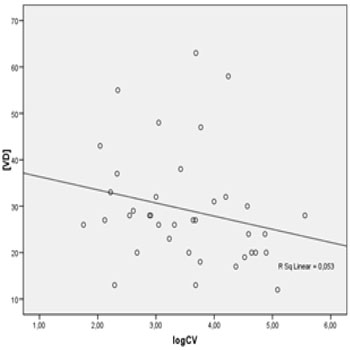 Figure 3: Linear regression between plasmatic VD concentration (ng/dL) and cumulative time of use of efavirenz (months).

Spanish, Dutch, Americans, Norwegians, and Italians studies, like the great EuroSIDA study, indicate a prevalence of VD deficiency among people with HIV around 60-80% [4,16,23].
The present study is a cross-sectional analysis in which limitations occur to the determination of a causal relationship, because the absence of temporality. The cross-sectional studies are predisposed to prevalence bias. This study allows only the description of associations between variables.
The prevalence of VD deficiency in the studied sample (< 32ng/dL) was 72.8%. This value is consistent with works done in other countries, including temperate climates, in contrast to the tropical climate of the State of Rio de Janeiro. This element suggests a strengthening of the argument that the presence of a tropical climate does not act robustly protecting the population of VD deficiency.
The variables age, sex, duration of antiretrovirals, and time since diagnosis showed no statistically significant association with VD concentrations. There is no robust scientific evidence and biological plausibility that makes even the age and sex factors strongly associated with VD deficiency. More specifically on the time since diagnosis, we must take into consideration that the diagnosis can be performed at different stages of the disease, not meaning the precise time of infection. In addition, there is variability in terms of speed of progression to severe immunosuppression among individuals that make the time since diagnosis a variable full of confounding factors. The result of association analysis between VD concentrations and total time of antiretrovirals may be affected by the fact that most schemes are formed by 3 or 4 different medications, and are not necessarily held to the same drugs and schemes throughout the all history of antiretrovirals. Treatment dropouts, poor compliance, and exhibitions for different frequencies with different schemes make this analysis predisposed to confounding variable.
Likewise, the analysis of the association between VD concentration and CD4+ lymphocyte count, that express the degree of immunosuppression, may be affected by the fact that antiretroviral is started when the CD4+ lymphocyte count is low, currently in Brazil < 500 cells/mm³ and previously < 350 cells/ mm³. In patients with high CD4+ lymphocyte count were included treatment-naive and chronic users of antiretroviral drugs with good adherence, that could have different antiretroviral cumulative time and could be experimented with different schemes. Those with more severe immunosuppression mainly concentrate individuals with newly diagnosis, recent begin of antiretroviral, individuals previously diagnosed with clinical and virologic failure, or poor adherence to treatment. These factors make the complex assessment of the association between VD deficiency and CD4+ lymphocyte count. A not statistically significant correlation between the CD4+ lymphocyte count and VD concentration was found, with negative β. This finding may reflect a prolonged and effective use of antiretroviral drugs, especially with schemes involving the EFV, among patients with higher CD4+ lymphocyte count, which would lead to a reduction in plasma concentration of VD.

Another endpoint would be the analysis between detectable or undetectable viral load groups and VD deficiency. This analysis may be affected by the fact that the undetectable group patients mostly were using antiretroviral and have different time of use of different drugs. The detectable group is composed of naive and patients on antiretroviral therapy with low compliance or failure. When analyzed by linear regression, the logarithmic viral load of the detectable group and VD concentration, we noted a not statistically significant correlation, with negative β. Possibly the viral fitness aggravates an inflammatory condition of the body that can negatively influence the plasma concentration of VD. In an experimental model, the presence of the gp120 protein of HIV increased macrophage expression of CYP27B1, which theoretically could reduce the plasma concentration of 25(OH)D [ 26 ]. We cannot rule out the influence of previous schemes, mainly involving the EFV among patients with high viral load due to dropouts or virologic failure.
There was no statistically significant difference between the mean concentration of VD when comparing patients experienced with antiretrovirals and naïve It may be a consequence of the fact that users of antiretrovirals use a broad range of schemes and medicines, current and previous, which could act in different ways on concentrations of VD.
A statistically significant correlation of cumulative time of use of EFV and VD concentration is a result that reinforces the theory that the EFV is the antiretroviral drug most associated with VD deficiency. This study suggests that the influence of EFV reducing the VD concentrations possibly can be time dependent. Studies that take into consideration the cumulative use of antiretroviral therapy and VD deficiency are scarce. According to current literature, the EFV suppresses CYP2R1, which has been suggested as a reason for reducing the concentration of 25(OH)D. Moreover EFV induce CYP3A4 which could compensate for the suppression of CYP2R1 increasing the concentration of 25 (OH)D. Currently, the role of CYP3A4 as a 25-hydroxylase activity has been seen as secondary which could explain the predominance in lowering effect of 25(OH)D concentrations caused by suppression of CYP2R1 by EFV. Clinical Impacts of the influence of EFV in concentration of 25(OH) D are undetermined.